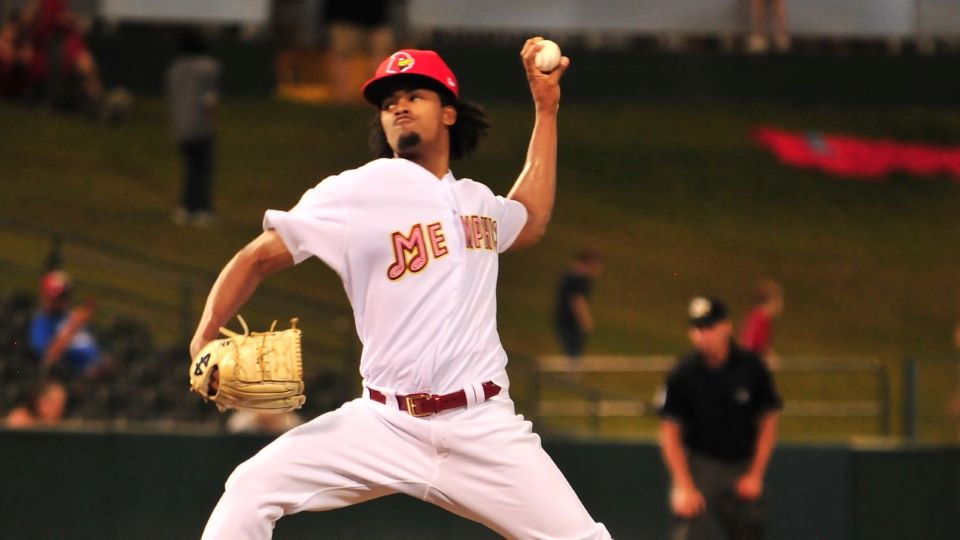 There's unhittable and then there's untouchable. Genesis Cabrera was both on Saturday night.

The Cardinals' No. 9 prospect struck out nine consecutive batters, tying the team and Pacific Coast League record, as Triple-A Memphis cruised to a 4-0 blanking of Omaha at AutoZone Park. He fired seven innings of one-hit ball and equaled his career high with 12 strikeouts.

Video: Memphis' Cabrera strikes out nine in a row

The 22-year-old southpaw has had his share of ups and downs in his second stint at the Triple-A level, but Saturday showcased his best.

Cabrera surrendered a ground-ball single to Adalberto Mondesi with one out in the first and promptly walked Erick Mejia. But he got Jorge Bonifacio to fly to center field and picked off Mondesi, who made a break for third, to end the inning.

After that, it was smooth sailing. Mondesi's knock was the only hit Cabrera allowed and the Storm Chasers didn't have much luck making contact the rest of the night.

The native of the Dominican Republic worked a 1-2-3 second, then issued a leadoff walk to Taylor Featherston in the third, but he was Omaha's last baserunner until the ninth. Cabrera retired the next 15 batters, 11 via the strikeout. After Rudy Martin fouled out, he finished the inning by punching out Jecksson Flores and Mondesi.

The southpaw struck out the side in the fourth and fifth. He got Mejia, Bonifacio and Chase d'Arnaud swinging in the fourth before freezing Elier Hernandez and Featherston and sending Adam Moore back to the dugout on a foul tip in the fifth.

Cabrera got ahead of Martin, 0-2, in the sixth, but Martin evened the count before plate umpire Nate Tomlinson rung up the outfielder on a pitch that painted the outside corner for a ninth straight strikeout. He tied the PCL mark set by  Alex Reyes, who accomplished the feat on May 25, 2018 against Oklahoma City.

"That was fun to watch today," Redbirds pitching coach Dernier Orozco said.  "Everything was working. His curveball was a lot better than his last outing and there was better location on the fastball. Batters had more of a chance to swing and miss today."

Flores ended the streak by flying to center, but Cabrera fanned two more in a perfect seventh to match the  personal best he set for Double-A Montgomery in the Rays system on June 14, 2018. Prior to Reyes' performance last season, there hadn't been a pitcher in the 116-year history of the Pacific Coast League to strike out nine straight hitters. Now there have been two in back-to-back seasons, and they've both been Redbirds.

"I remember that," Orozco said with a laugh. "It's unbelievable. I have no words for either time. They were impressive. ... When you see a performance like today, or like Reyes last year, it's just fun to watch."

Acquired from Tampa Bay at the 2018 Trade Deadline, Cabrera made his Major League debut for the Cardinals this season and was 0-2 with a 6.17 ERA in five games, including two starts. He is 5-6 with a 5.91 ERA in 20 PCL games, including 18 starts, and has been a bit of a wild card. But Orozco said that with the season winding down, Saturday was a perfect time for a start like this.

Kodi Whitley worked the final two innings, giving up a hit and fanning four of the seven batters he faced, to wrap up the Redbirds' eighth shutout.

Cardinals No. 14 prospect Edmundo Sosa and 15th-ranked Justin Williams homered for Memphis, with Sosa ripping a two-run blast in the first and Williams smacking a solo shot in the fifth.

Katie Woo is a contributor to MiLB.com. Follow her on Twitter @katiejwoo. This story was not subject to the approval of the National Association of Professional Baseball Leagues or its clubs.