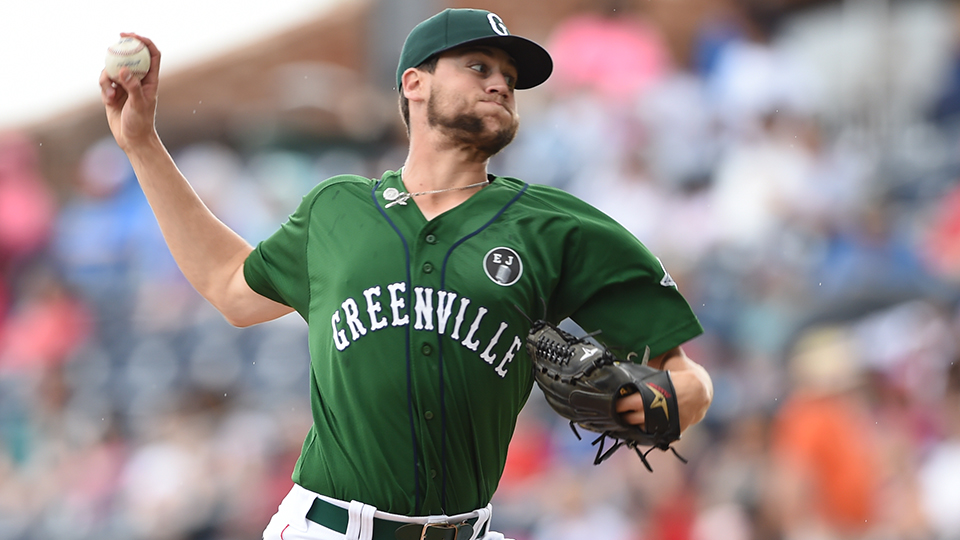 Hunter Haworth has bounced between the bullpen and the starting rotation for Class A Greenville this season. In his last two starts, he's been virtually unhittable.

The Red Sox prospect pitched to contact on Saturday, allowing one hit over seven innings to extend his scoreless streak to 13 frames, as the Drive cruised past Asheville, 7-0, at Fluor Field at the West End. It was the second straight outing in which he's given up just one hit.

After Haworth (5-7) picked up a groundout and a strikeout to begin the game, Kyle Datres bounced the right-hander's next pitch over the right-center field wall for a ground-rule double. It turned out to be the Tourists' only knock.

"At the end of the game, I saw there was only one hit up there and realized that was the only hit they got," Haworth said. "I didn't really think too much about it."

The Drive scratched across three runs in the bottom of the first on a pair of taters, including a solo shot by top-ranked Boston prospect Triston Casas.

"Anytime you can throw a zero in the first and have your team score early, it takes some pressure off the pitcher," Haworth said. "It's not as tense if you get some runs. It was very, very nice."

The 22-year-old needed 13 pitches in the second and only six in the third for back-to-back 1-2-3 innings. Datres broke up his streak of seven in a row retired by working a seven-pitch walk in the fourth.

Haworth issued another walk to Willie MacIver to open the fifth but got Cristopher Navarro to bounce into an inning-ending double play. Over the next two innings, he hit a batter and walked another before getting John Cresto to ground to shortstop to end the seventh and his night. He threw 53 of 90 pitches for strikes.

"I haven't thought too much about the scoreless streak," the hurler said. "For me, it's going out there and competing on every pitch. Any way I can help the team and give some good quality innings, I will. It feels good to walk away with a win. You just have to continue working hard because nothing is a shortcut."

Haworth has thrown 21 2/3 innings in four appearances versus the Tourists, who are 13-for-77 (.169) against him. He chalked it up as coincidence. "I go out there with a game plan and I stick with it, no matter who's in the box," he said.

The Hollister, California, native said it was initially tough to find a routine before cracking the starting rotation.

"Coming from the bullpen, you don't know when you're going to get called," he said. "Now, you have a set routine and you're able to prepare for a start and hopefully have a quality start."

However, Haworth credited the time in the bullpen for preparing him for a starter's role.

"It's helped a lot, especially with the preparation," he said. "You get the chance to see the hitters' tendencies -- what they like, what they don't and where to pitch them. It's actually pretty nice to chart these guys, because you get to read them as you chart."

The 22nd-round selection in the 2017 Draft out of Chico State took a no-hitter into the sixth in his last start before giving up a one-out bunt single to Hickory's Jax Biggers. The back-to-back scoreless starts have lowered his ERA from 5.19 to 4.50.

"I feel like everything I've been working for has been paying off," Haworth said. "All the days I've been taking serious catch play and getting off the mound. I personally feel that I've turned the page as a pitcher from where I was in the beginning of the season to where I am now."

"I was kind of iffy in the beginning, just trying to find pitches," said Haworth, who's tied for ninth in the South Atlantic League with 117 whiffs. "Now, I feel like I have a good plan of what to attack hitters with in certain counts and having the confidence in all my pitches.

"Being a reliever was a lot of help because I was constantly getting into games. Throwing these extended innings in long relief really helped me really get a feel for all my pitches and let me know what I was doing right and wrong."

"He's a great guy to have on the team," Haworth said of Casas. "He's a great dugout guy. There is nothing negative about him at all. He's got some pop in his bat. He's a great dude and really good defensively. He's probably one of the best players I've played with in a long time."

Dan Stokes is a contributor to MiLB.com. Follow him on Twitter @ByDanStokes. This story was not subject to the approval of the National Association of Professional Baseball Leagues or its clubs.