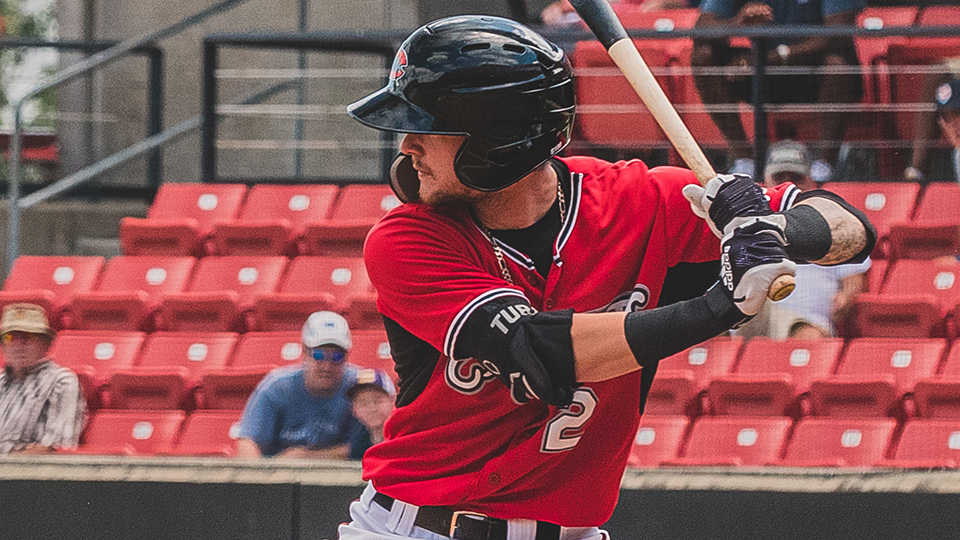 Brewers SS Brice Turang, Class A Advanced Carolina: 3-for-4, 2 2B, BB, 3 R -- The top Brewers prospect continued to climb out of a funk with his second three-hit effort in six games. Turang has hit safely in six of his last eight contests to bring his average with the Mudcats up to .209. It was low as .179 10 days ago. The 19-year-old's two doubles marked the first time he had a pair of extra-base hits since July 1, when he played in the Class A Midwest League. Gameday box score

Angels OF Brandon Marsh, Double-A Mobile: 3-for-4, HR, 2B, RBI, R -- The No. 2 Angels prospect extended his hitting streak to 10 games in the BayBears' 3-1 loss to Jacksonville, with his opposite-field homer in the first inning accounting for the lone run. He's batting .469 with five extra-base hits during the streak. At .299, Marsh's average is at its highest point since July 15 -- the only day this year during which the 21-year-old posted more total bases (eight) than he did on Saturday. Gameday box score

Rays LHP John Doxakis, Class A Short Season Hudson Valley: 4 IP, 0 H, 0 R, 3 BB, 4 K -- The second-round pick in this year's Draft has made 11 starts for the Renegades, and Saturday's was his third hitless outing. Four innings marked the deepest he's pitched into a game since Tampa Bay drafted him 61st overall. The Texas A&M product hasn't allowed a home run as a pro but has issued three walks in consecutive starts. Doxakis, the No. 21 Rays prospect, owns a 2.20 ERA over 28 2/3 innings. Gameday box score

D-backs 1B Pavin Smith, Double-A Jackson: 4-for-4, HR, 2B, 2 RBI, R -- Smith knocked in runs with a double in the fifth inning and a first-pitch solo homer in the seventh as the Generals topped Pensacola, 8-4. It was his first four-hit effort since posting that many knocks on back-to-back nights to start June. The 23-year-old has multiple hits in four of his last six games, with only four strikeouts in his last 10. He's spent the entire season in the Southern League and owns a .296/.372/.478 slash line. Gameday box score

Red Sox RHP Konner Wade, Double-A Portland: 7 IP, 4 H, 0 R, 1 BB, 4 K -- The right-hander faced the minimum in four of his seven frames on the mound, including each of the last three. He threw 63 of 91 pitches for strikes to set the tone in the Sea Dogs' 1-0 win over Trenton. Wade has gone at least five innings in six straight starts, allowing one earned run or fewer in four of them. He brought his ERA down to 2.95, which would rank fifth in the Eastern League if he had enough innings to qualify. Gameday box score

White Sox LHP Sam Long, Class A Kannapolis: 7 IP, 2 H, 0 R, 0 BB, 6 K -- The 24-year-old took a perfect game into the seventh inning before yielding a pair of knocks in the Intimidators' 2-1 win over Charleston. Long escaped that jam with a pair of strikeouts and continued a dominant stretch. He has not allowed an earned run in five of his last seven starts, bringing his ERA down from 3.88 to 3.66. The 2016 18th-round pick has not been tagged for a home run since July 15. Gameday box score

Mets C Francisco Alvarez, Rookie Advanced Kingsport: 2-for-4, 2 HR, 2 RBI, 2 R -- The Mets' No. 5 prospect swatted a pair of solo shots for his first-career multi-homer game as the K-Mets cruised past Bluefield, 9-2. In his first professional season, Alvarez has put up a .319/.417/.514 slash line across two levels of Rookie ball. The 17-year-old hit .462 in the Gulf Coast League and owns a .288 average since moving to the Appalachian League. Gameday box score

Dodgers C Connor Wong, Double-A Tulsa: 3-for-5, RBI -- Los Angeles' No. 29 prospect capped his first Texas League three-hit game with a walk-off single in the 10th inning as the Drillers outlasted Corpus Christi, 6-5. Wong is 13-for-30 (.433) with a pair of homers and seven RBIs during an eight-game hitting streak that's boosted his slash line to .300/.344/.492 since he was promoted from Class A Advanced Rancho Cucamonga on July 15. Gameday box score

Red Sox OF Gilberto Jimenez, Class A Short Season Lowell: 4-for-4, 2 SB -- The 19-year-old extended his hitting streak to seven games with his third career four-hit effort and first in the New York-Penn League as the Spinners rallied past Vermont, 3-2. Jimenez is 13-for-30 (.433) with seven runs scored during the streak and ranks second on the circuit with a .372 behind average. He tops the circuit with 77 hits and ranks fourth with a .401 on-base percentage, .884 OPS and 100 total bases. Gameday box score

Reds RHP Adrian Rodriguez, Class A Dayton: 7 IP, 1 H, 0 ER, 2 BB, 5 K -- The 23-year-old right-hander was nearly unhittable as the Dragons blanked Lake County, 3-0. A third-inning infield single by Ulysses Cantu was the only hit he allowed in his fourth straight scoreless start. Rodriguez has gone 21 1/3 innings without surrendering an earned run to lower his ERA to 3.03. Gameday box score

Tigers RHP Wilkel Hernandez, Class A West Michigan: 6 IP, 1 H, 0 R, 0 BB, 2 K -- Make it back-to-back scoreless starts for the 20-year-old right-hander. Hernandez gave up a two-out single in the first inning to Michael Curry, then retired the final 16 batters he faced in the Whitecaps' 3-0 win over Fort Wayne. He's tied for second in the Midwest League with nine wins and has a 2.96 ERA in 10 starts since the Midwest League All-Star break. Gameday box score

Royals LHP Drew Parrish, Rookie Advanced Burlington: 3 IP, 0 H, 0 R, 0 BB, 8 K -- Kansas City's eighth-round pick in this year's Draft hurled three perfect innings, striking out eight of the nine batters he faced. The lone contact off Parrish came in the first inning, when Pulaski's Antonio Cabella grounded out. The Florida State product has given up two runs on seven hits over 17 1/3 innings in his last six appearances to get his ERA down to 2.52. Gameday box score

This story was not subject to the approval of the National Association of Professional Baseball Leagues or its clubs.