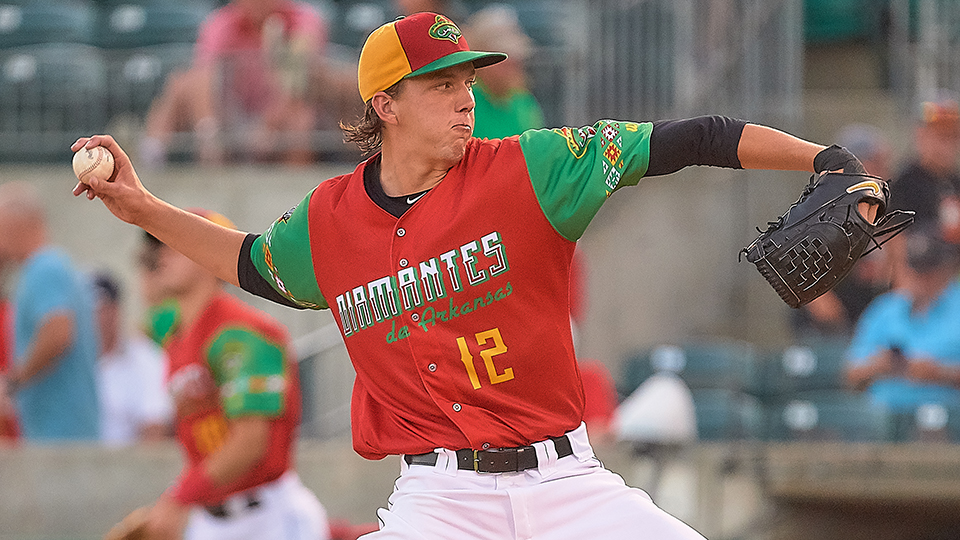 Logan Gilbert has allowed eight hits and five walks while striking out 22 in his last three starts. (Mark Wagner/Arkansas Travelers)

Logan Gilbert takes pride in being able to repeat his delivery. In his last three starts, he's been able to repeatedly deliver zeros.

MLB.com's No. 49 overall prospect allowed two hits and a walk while striking out six over six innings in his third straight scoreless outing as Double-A Arkansas dropped a 1-0 decision to Amarillo on Saturday night at Dickey-Stephens Park.

The second-ranked Mariners prospect extended his shutout streak to 18 frames and lowered his ERA to 2.17 in eight Texas League starts.

"I feel good," he said. "My body is holding up for the most part and I've been executing pitches. The strength staff at all three levels have made sure to maintain my strength and weight so I can get out there and pitch every fifth day."

Against the Sod Poodles, he retired the first five batters before yielding a two-out single in the second to Padres No. 13 prospect Hudson Potts. Gilbert then set down 11 in a row before allowing a one-out base hit to No. 27 prospect Buddy Reed and walking second-ranked Taylor Trammell in the sixth.

Gilbert noted that his slider was effective Saturday, "especially late [in the game]; they weren't picking it up early. It kind of blended in with my fastball and I was able to get some swings."

It's the second time this season that the 22-year-old has recorded three straight scoreless starts, matching his efforts from June 29-July 11, his final outing with Class A Advanced Modesto before being promoted to the Texas League.

"There's definitely some difference across the different levels," Gilbert said. "There is a learning curve. [At Double-A], the batters see the ball better, track pitches better. They adjust to what you're doing. It's been a growing process, start to start. It's just part of learning."

The 6-foot-6, 225-pounder said his success is rooted in repetition.

"It goes all the way back to high school," he said. "I have a slow tempo out of the windup and that repeats easily. Every now and then my direction to the plate can fall off, but I think I repeat everything pretty well.

"As a team, we're trying to play our best baseball now. We're definitely trying to take it one game at a time. We're making a few adjustments and fine-tuning before the playoffs start."

Amarillo scored the game's lone run in the seventh off right-hander Jack Anderson (4-2). A one-out double by 12th-ranked Padres prospect Owen Miller jump-started the rally. Luis Torrens was intentionally walked and Potts singled to load the bases before Kyle Overstreet lifted a sacrifice fly to left.

Duane Cross is a contributor to MiLB.com. Follow him on Twitter @DuaneCrossMiLB. This story was not subject to the approval of the National Association of Professional Baseball Leagues or its clubs.