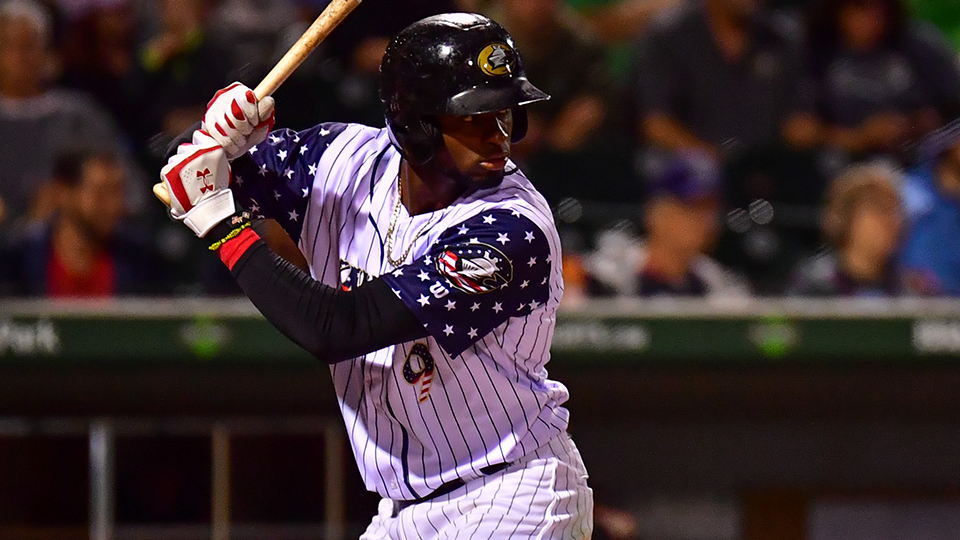 Luis Robert has hit five homers in his last seven games and has 19 RBIs in 21 contests in August. (Laura Wolff/Charlotte Knights)

If these end up as Luis Robert's final days in the Minor Leagues, MLB.com's No. 5 overall prospect  is leaving on a high note.

Robert blasted his 30th homer of the season in Triple-A Charlotte's 8-2 loss to Norfolk in the second game of Saturday's doubleheader at BB&T Ballpark. With 36 stolen bases across three levels, the top White Sox prospect joined the 30-30 club with the opposite-field solo shot off right-hander Chandler Shepherd. Earlier in the day, Astros No. 1 prospect Kyle Tucker also gained entrance by nabbing his 30th base for Triple-A Round Rock.

The White Sox have not decided if Robert -- or any other top prospects, such as fourth-ranked Nick Madrigal or No. 10 Zack Collins -- will join the big league club when rosters expand in a week, MLB.com's Scott Merkin reported. Yoan Moncada, who completed a rehab assignment with Charlotte on Tuesday, said he thinks Robert is ready for the Majors.

But White Sox general manager Rick Hahn said earlier this week that whatever choice is made will prioritize the players' long-term development.

"It's not about self-interest or self-preservation or to make anyone individually look good," Hahn told MLB.com. "It's about what's best for the long-term health of the organization.

"Again, there's a lot that goes into deciding it. At the end of the day, player development is fundamentally a baseball decision about putting a player in the best position to succeed, and that's what will carry the day with any decision to promote a player."

A year ago, the White Sox chose not to bring up top prospect Eloy Jimenez, who had a dominant season at the Minors' highest two levels.

Robert, 22, has succeeded wherever he's played this season. He began the year with Class A Advanced Winston-Salem and moved up after hitting .453/.512/.920 in 19 games. He spent all of May and June with Double-A Birmingham and continued to excel with a .314/.362/.518 slash line. He hit eight home runs at each level and totaled 29 steals between the two clubs.

Since a promotion to Charlotte on July 9, the 22-year-old Cuban has gone hitless in only 10 of 39 games. Four of them came in a span of 10 days to start this month, but he has five homers in his last seven games and has lifted his slash line with the Knights to .304/.356/.661. His 1.017 OPS would lead the International League if he had enough plate appearances to qualify.

Charlotte's season ends on Sept. 2. The Knights trail Gwinnett by 1 1/2 games in the International League South Division but lead Durham by four games for the Wild Card. There is value, Hahn said, in leading a playoff charge.

"Even being in the pennant race alone, even what they're doing on a nightly basis, the battle to try to get into the postseason is a benefit to them," he said. "Eventually, you balance that about what they're going to benefit from Chicago versus going through that and make a decision."

Joe Bloss is a contributor to MiLB.com. Follow him on Twitter @jtbloss. This story was not subject to the approval of the National Association of Professional Baseball Leagues or its clubs.